"Sir Roger Lumley" the  first electric loco in India introduced in 1928. It was first used for the Deccan Express train in 1030, covering the disputant from Bombay to Poona at a  120 kph top speed enabling them to cover the Mumbai – Poona distance in 2 hrs 45 min

WCM1  electric loco. Was used initially in the Western Railway starting in 1954
Video

Austrian Crocodile Locomotive, similar to ones operating in India. This one has a different wheel driving structure.
Video 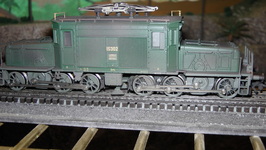